Reviewed by V from The Verbal Spew Review 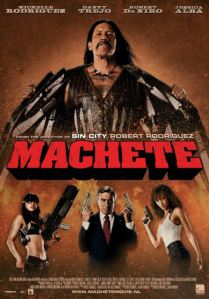 I’m a fan of director Robert Rodriguez so I had a sneaking suspicion that I would enjoy this. At the very least I knew I would love the soundtrack; you can add musician to Rodriguez’s laundry list of skills as he never fails to deliver pleasure to my ears with delicious mixes of mariachi and cool, cool guitar (his Grindhouse Blues track from Planet Terror being probably my favourite). Throw in some gratuitous violence and I’m more than game to sit back and let this one envelope me for a couple of hours.

The crux of the “story” is basically that former Federale and gentleman, Machete Cortez, has been hired by a most unwholesome political aide to assassinate Texas Senator McLaughlin (Robert De Niro), who is hellbent on exterminating the illegal immigrants fleeing Mexico over the Texan border. Things quickly go awry for Machete as he’s double-crossed, forcing him to go on the run, chopping people up along the way. Justice and vengeance as themes feature heavily in this film, but while I thought in the beginning that this could be a Mexican style homage on steroids to The Punisher, with less brooding and more blood, I quickly found that I was very wrong. Yes, Machete does have to hack his way through the fodder to get to the ultimate big boss battle with the arch-nemesis who butchered his family, but none of it is planned in any sort of organised way. The mayhem the plot provides just seems to lead him into the trouble he needs to find, which adds to the hilarity of this movie and its premise rather than detracts from it.

In an unexpected turn, I have little quibble with any of the performances the cast of Machete gave, probably because they weren’t called upon to offer anything more substantial than total cheese. Danny Trejo is, of course, perfect as Machete Cortez. Steven Seagal as Mexican drug kingpin Torrez was the target of much mirth from myself, as I had no clue he was in this, and so when his bloated presence filled my screen and he opened his mouth to form that atrocious accent, I genuinely laughed out loud. Michelle Rodriguez as Luz/She was solid in her usual, stereotypical role of resident badass chica. Jeff Fahey was perfect as the whispering, sexually frustrated and duplicitous senator’s aide. Jessica Alba as Agent Sartana was, well, fine. I mean, she’s Jessica Alba, all you have to do is look at her. Don Johnson as the vigilante Von was in equal parts terrifying and hardcore cool. Cheech Marin as Machete’s padre brother provided even more comedic moments. And Lindsay Lohan was naked a lot.

And now for Mr. De Niro. I enjoyed his portrayal of Senator John McLaughlin. I think he played it perfectly, but I have to admit, I don’t really think he had all that much to play. Frankly, there didn’t seem to be much De Niro meat for me to sink my teeth into until later on, near the climax of the film. The role itself appeared limited, but De Niro delivered with what he was given. He does play a convincing Southern Senator, he drew regularly on his stiff brand of comedy experience and his timing was spot on. I would have truly liked to have seen more of him, but De Niro wasn’t the draw, nor was he the Big Guns that this film needed to succeed. They already had plenty of other Big Guns. And knives, and garden machinery, and corkscrews, and six-inch red stilettos.

I thoroughly enjoyed Machete, it appealed to me but it’s definitely not for everyone. It was extremely violent and a tad gruesome, but it’s presented in such an amusing way that sometimes I forgot people were getting beheaded and disemboweled all over the place. With Machete himself clocking up a kill count that would rival Rambo’s and a shag count that would rival Bond’s, this is an action/comedy flick that doesn’t take itself at all seriously, and so I didn’t either.

It’s fun, but leave logic at the door. If you like a little splatter and a few gun-toting babes with your tea, then you’ll probably like Machete.